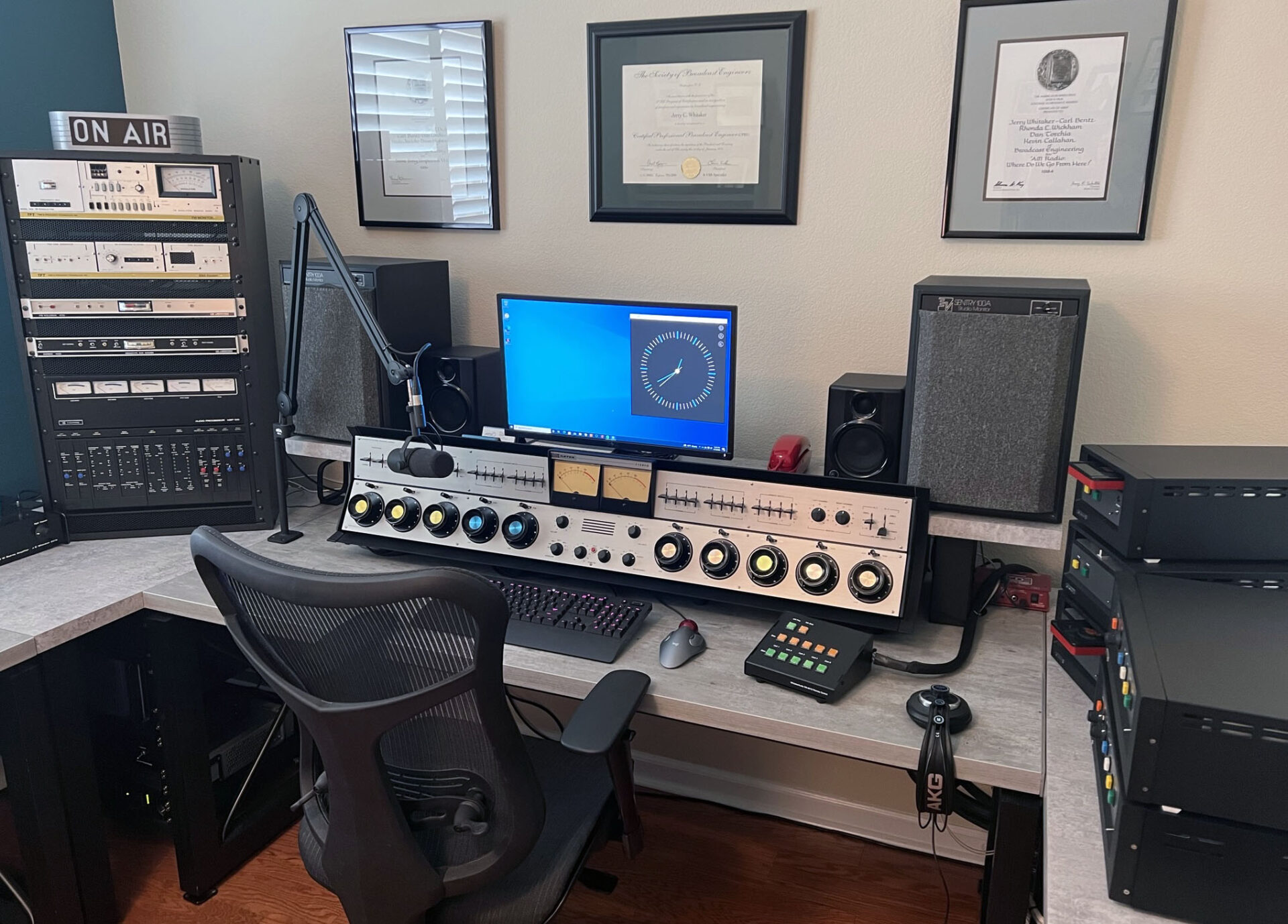 The 1970s were a great time for FM radio. As the dominant form of music entertainment of the time, working in FM was a great gig. This page brings it all back with a museum-quality studio straight from the '70s. This project evolved over time. But first some background.

Back in the day, I worked in radio in Northern California at an AM/FM station as Chief Engineer. It was a very good opportunity for me, since the owners at the time wanted the AM facility rebuilt and a new FM station put on the air. Even more important, they were willing to spend the money to do it right. It was a great experience. We had a very nice facility that served the community for many years.

Fast-forward four decades. In a chance visit to eBay one day I saw a Gates Executive Audio Console available for sale. We had one of those consoles at the station in the 70s. It came to pass that I purchased the console and rebuilt it. Then I went looking for other elements of the studio that I built back in the 70s. And that let me to a rather complete duplication of the FM studio I fondly remember from 40 years ago. And it all works! 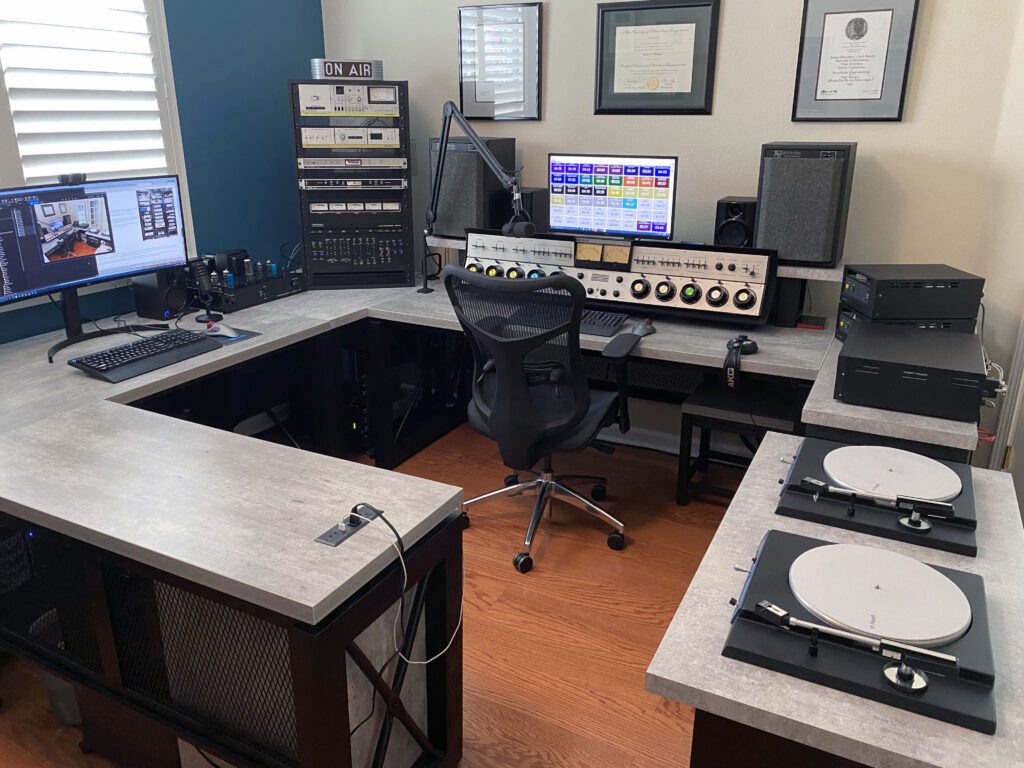 The center piece of the studio is a Gates Executive Audio Console. The studio in laid out in the usual U-shape, with a short return section at the rear. The return can function as an interview position. 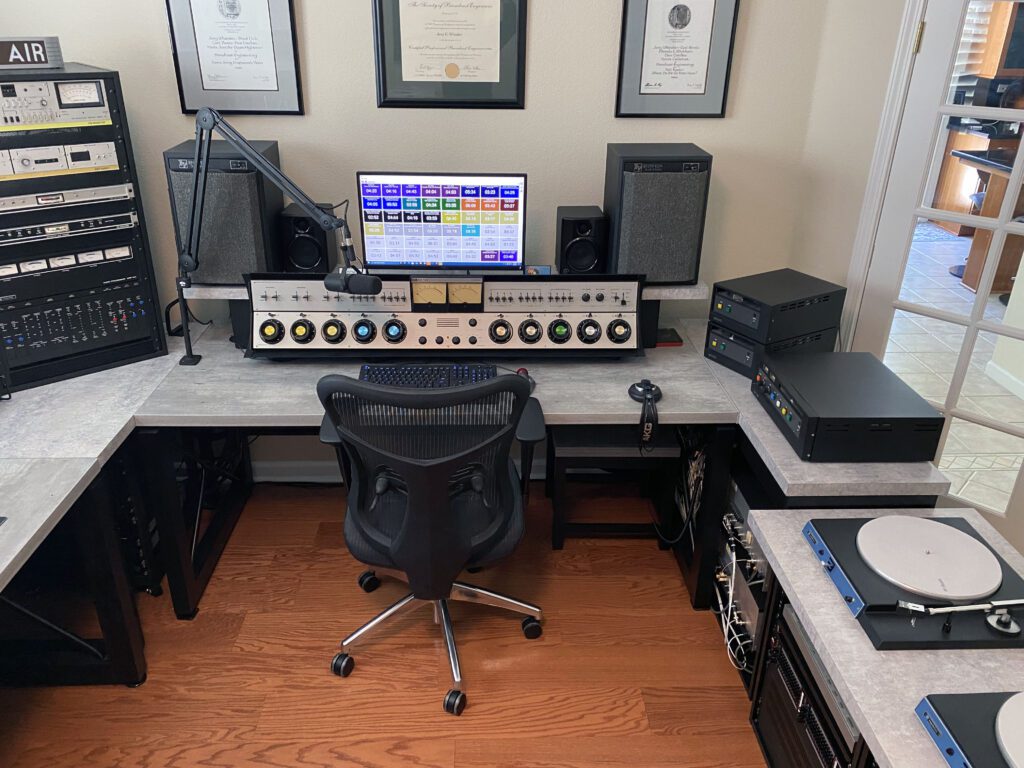 The studio occupies space in a working office. As such, space is somewhat limited and desk elements need to share functions. Very little attention has been paid to acoustics, since live recording is not currently done. Practical options exist for improving the acoustics, such as area carpets on the floor, movable baffles, and acoustic treatments of various types. 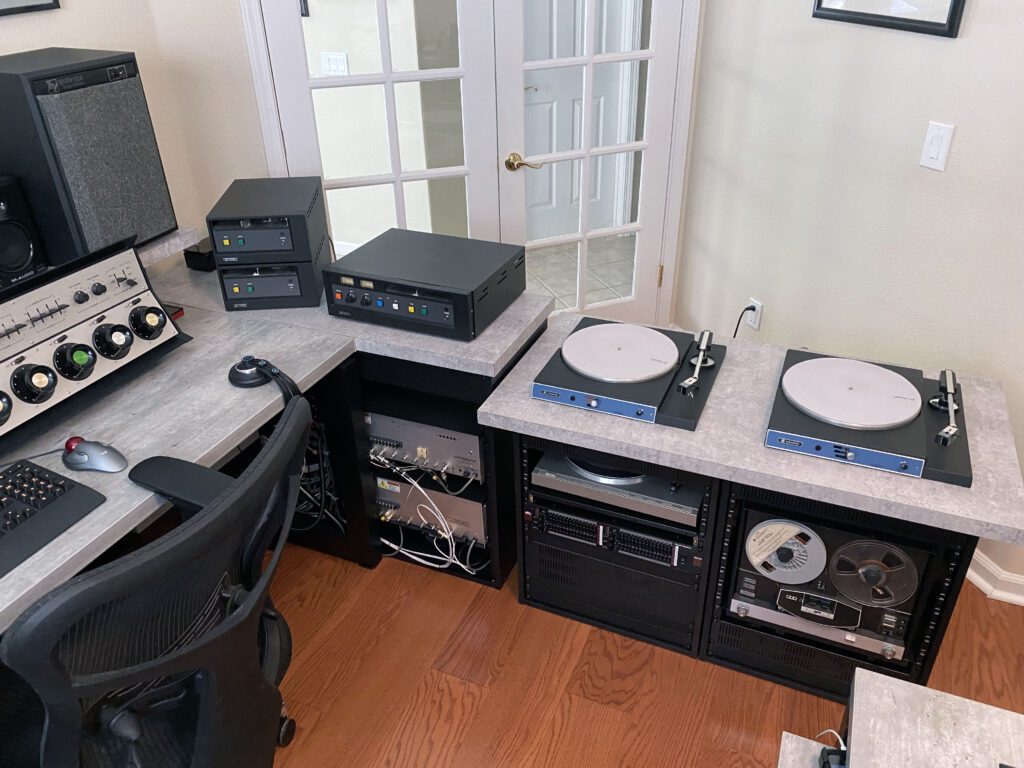 A remote control box is provided for the cart machines and the Ampex AG-440. The unit features Start and Stop functions and illuminated pushbuttons that mirror the status of the controlled devices. 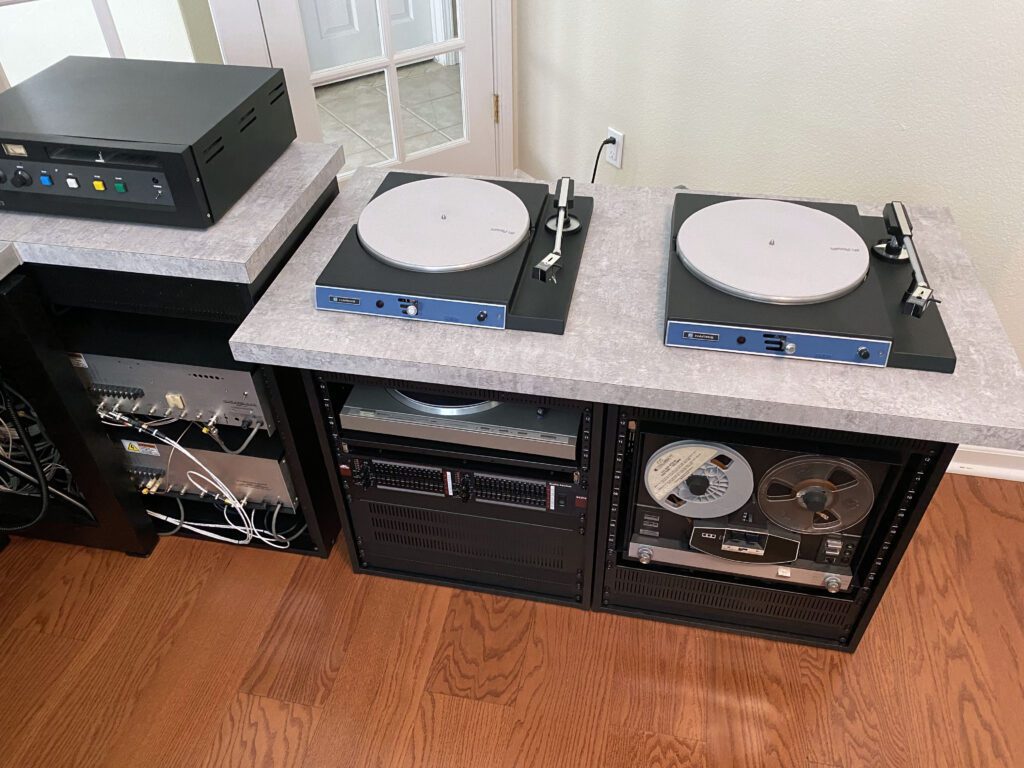 The turntables are in excellent condition. The Shure tone arms and cartridges are new-old-stock (NOS). A new felt pad is used on each platter to facilitate slip-cueing. 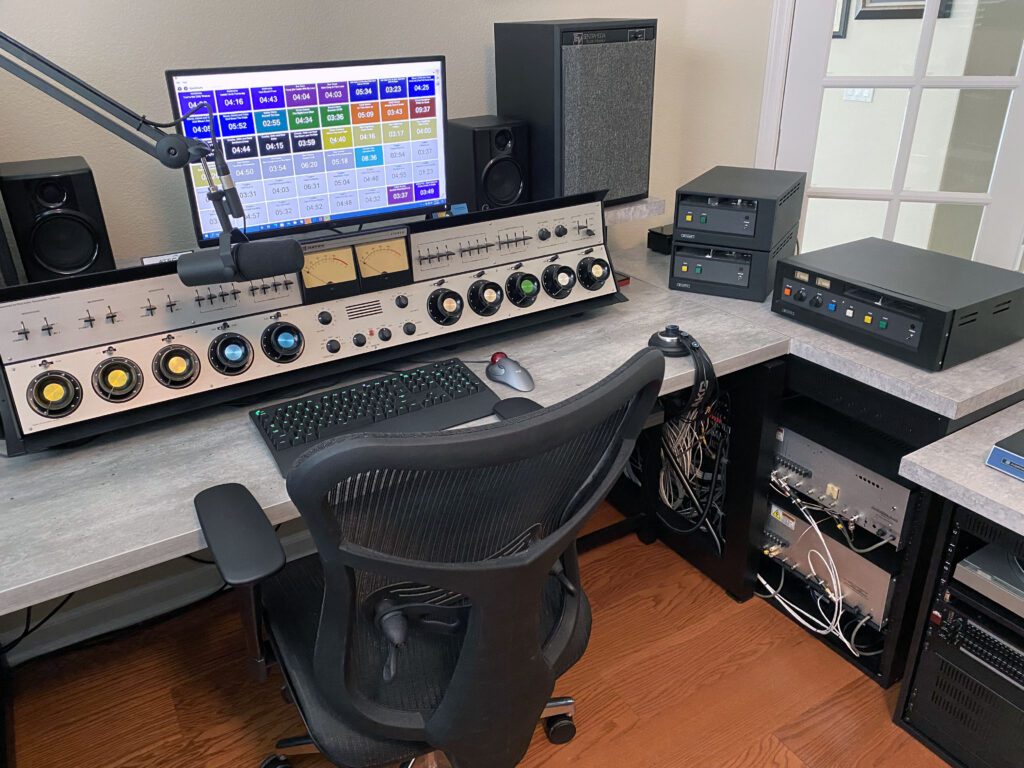 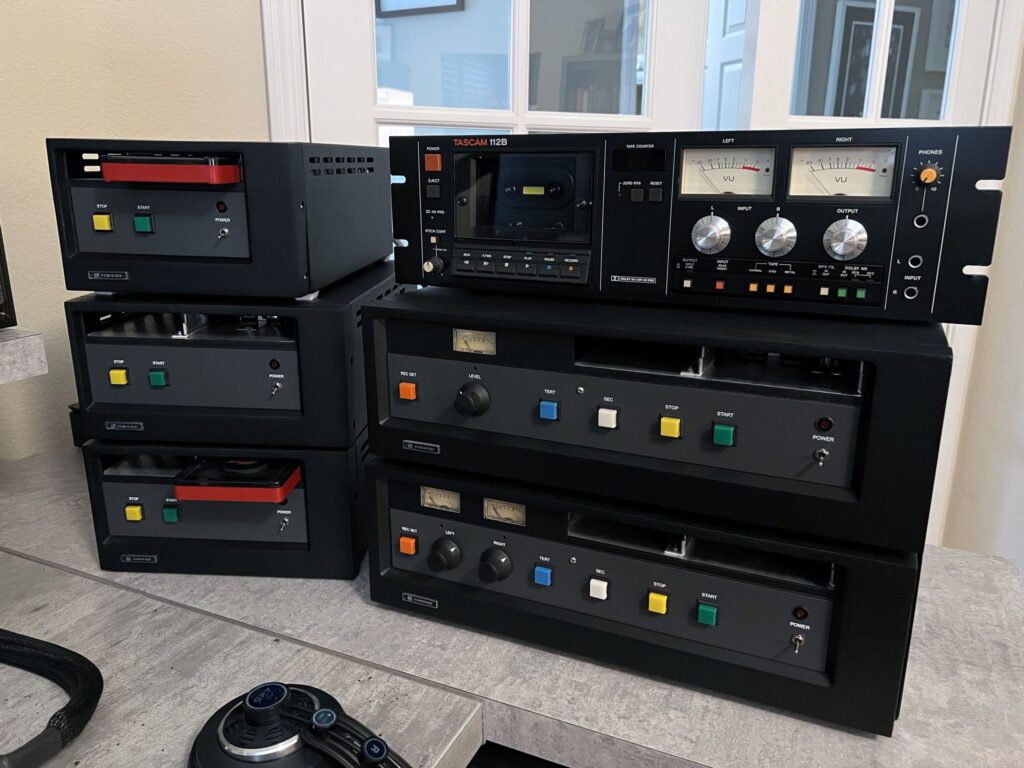 Since the studio photos were taken, several additional pieces of equipment have been acquired, refurbished, and installed. These include two more Harris Criterion 90 cart machines and a Tascam 112B cassette deck (as shown above).

Cart machines, of course, need cartridges. After some purchases on eBay, a full rack of NOS and used carts was acquired. All the cartridges needed servicing because the head pads had lost their resilience after all these years. Fortunately, 0.25-inch thick weatherstripping works rather well as a replacement. One side is slick and the other is adhesive. Perfect for cartridge pads.

The third turntable in the studio was also upgraded to a Technics SL-1200MK3D. This turntable is intended for long-duration plays, whereas the two Harris CB1201 turntables are used for playing individual selections. 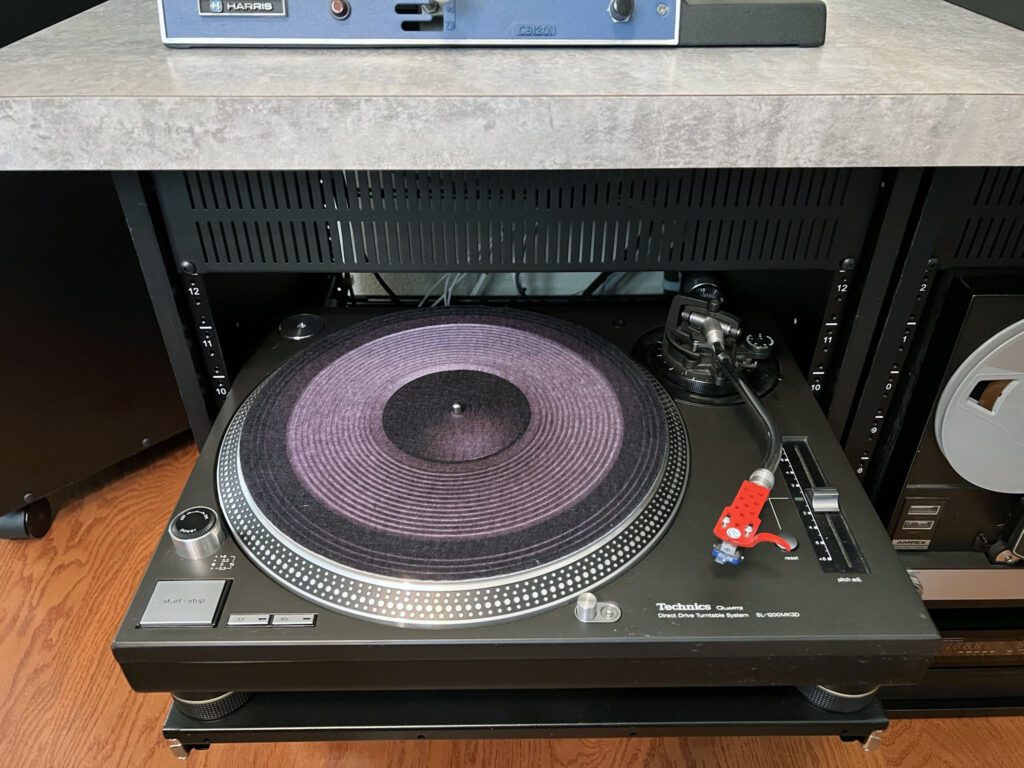 Future work includes connecting the Tascam cassette deck remote controls to the Executive console microphone channel muting system in order to facilitate making air checks. As planned, the deck will start when one or more of the channels is opened and stop after the channel(s) is closed. 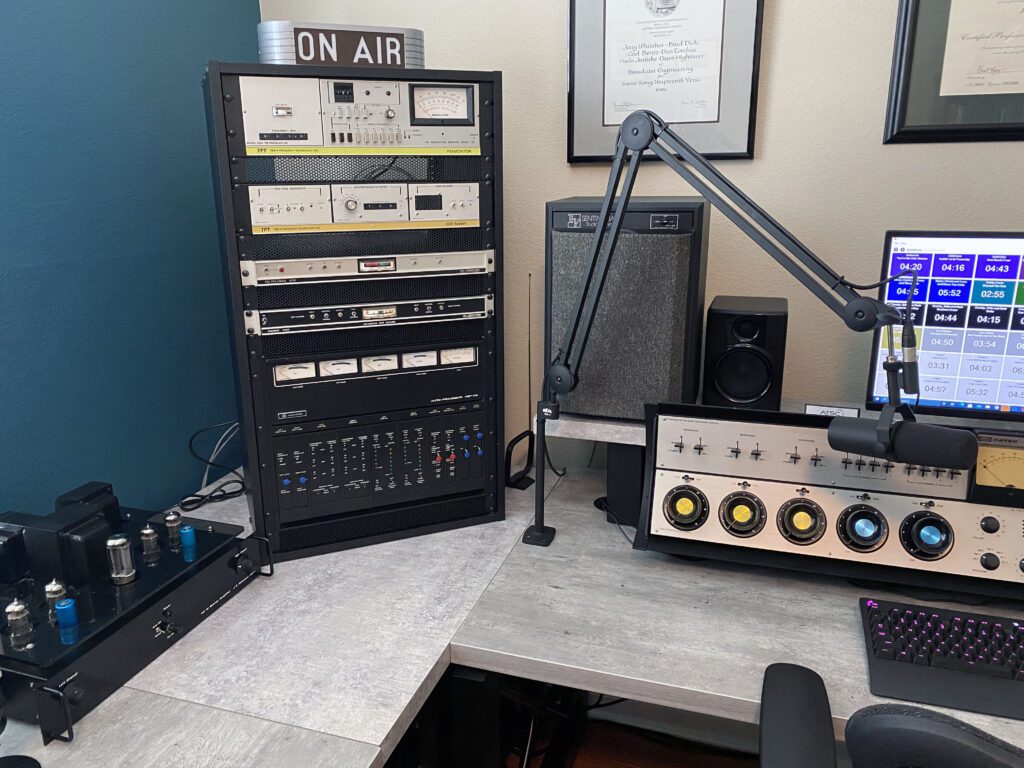 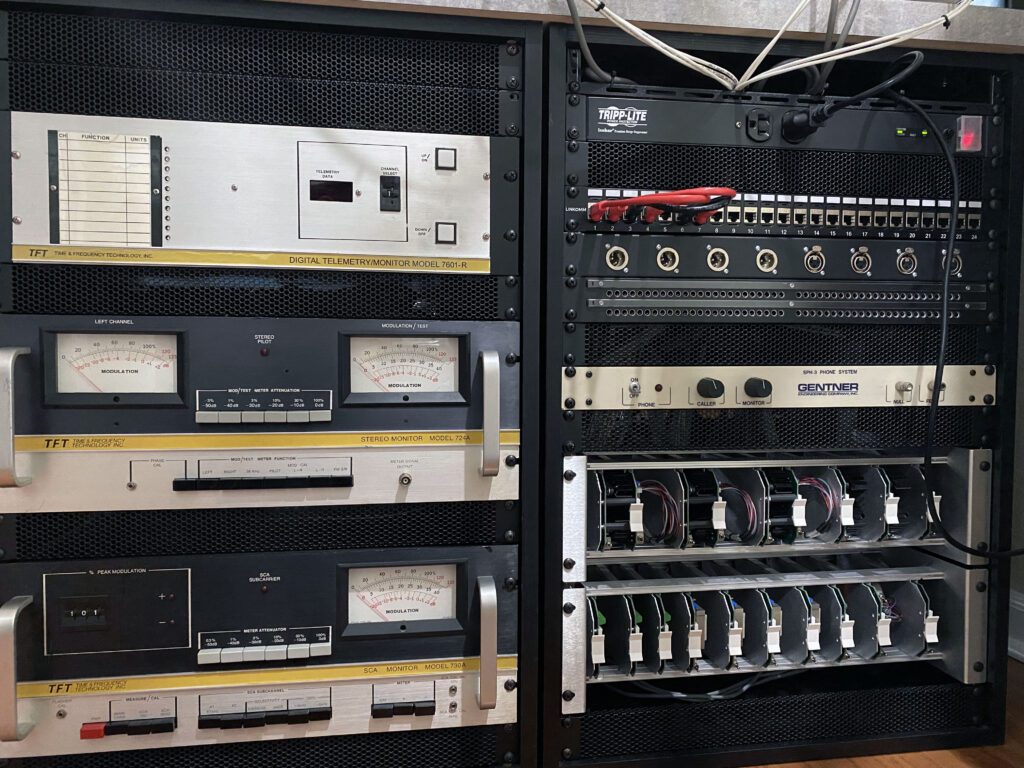 Twin racks are included for monitoring and terminal functions. On the right side the the photo, TT-type, RG-45-type, and XLR patch pays are provided. A Gentner SPH-3 phone patch can be seen below the patch bays. The top card frame houses program distribution amplifiers and the headphone amplifier. The bottom card frame houses input conditioning boards, a tone generator, and "cue/dim" controller. The "cue/dim" controller, when enabled, automatically decreases the volume of the monitor speakers when program sources are being cued. On the left side (from top to bottom) are a TFT 7601 transmitter remote control, TFT 724 stereo monitor, and TFT 730 SCA monitor. 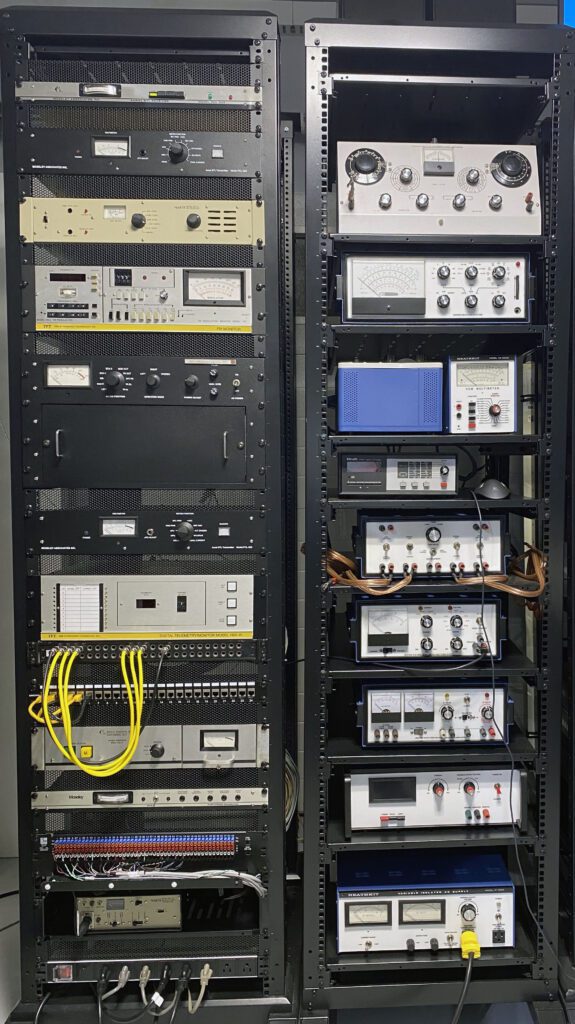 A Collins 310Z-2 FM exciter can be seen above. The exciter includes a 786V-1 stereo generator card. A second TFT modulation monitor is included in the rack, along with STL and RPU gear. Patch bays allow for reconfiguring the equipment as needed. The TFT 7601 is connected to the controller in the studio and can be used to energize or de-energize the exciter, effectively serving as the transmitter on/off control. 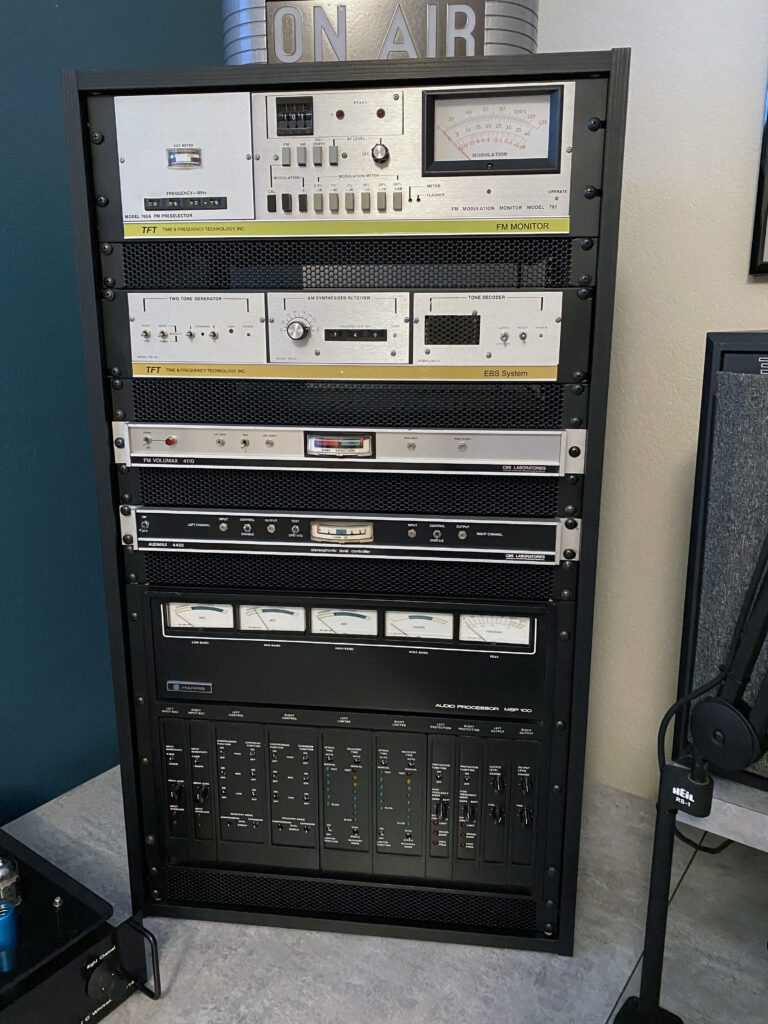 The full compliment of studio gear is as follows: 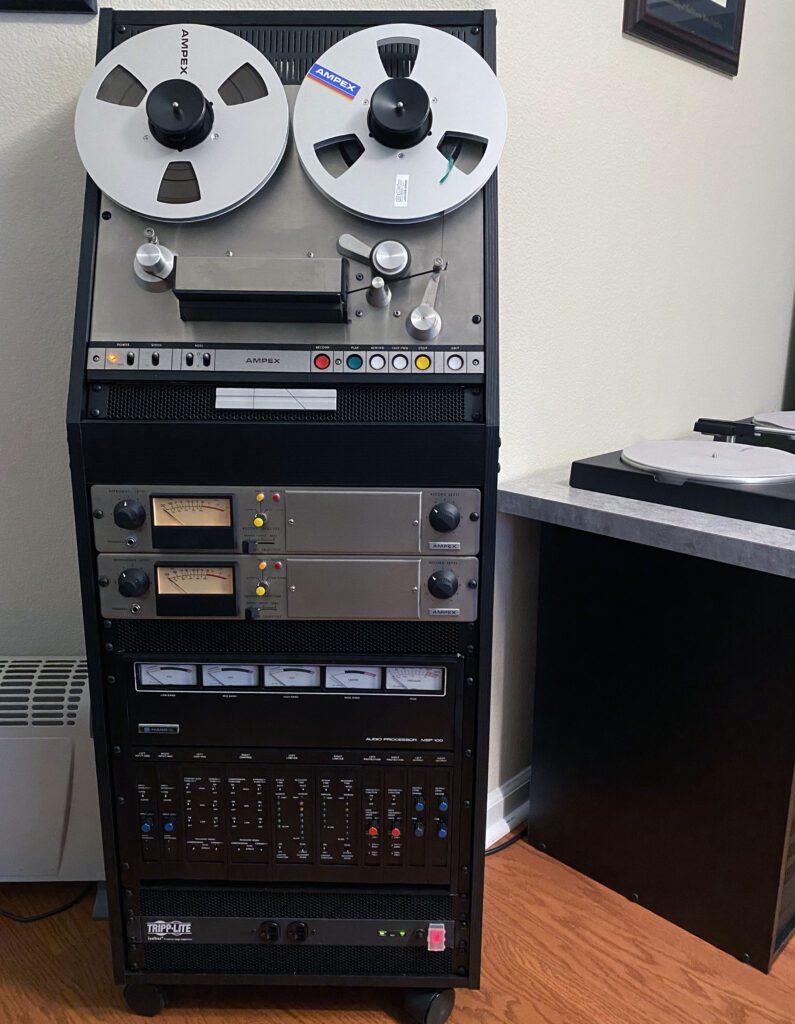 The full compliment of transmission gear is as follows: 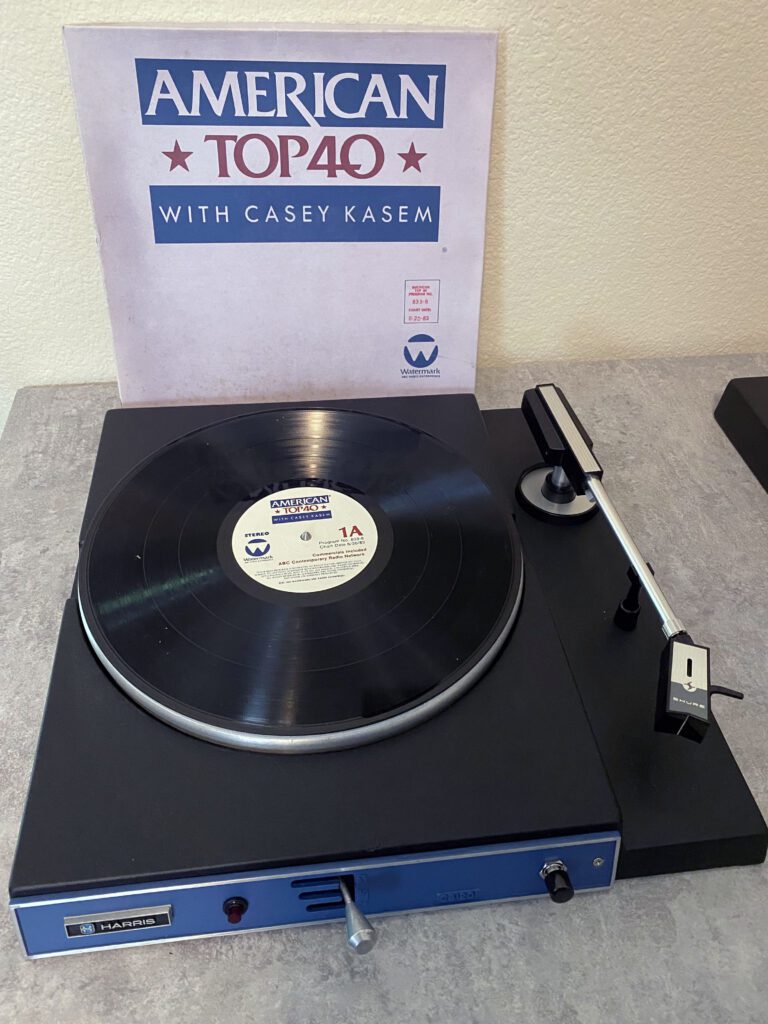 To round-out the vintage studio it seemed appropriate (and even necessary) to add some vintage vinyl. The current record library numbers about 100 albums, mostly 1960s and 70s rock, with some country included. A random search on eBay yielded the American Top 40 box set that aired on October 20, 1983. The four-record package includes the rundown sheet, which lists that week's "Hits From Coast to Coast." While a few years outside of the "70s era," it is nonetheless a cool piece of radio history.

Another piece of radio history that I was pleased to find on eBay was a 5-record set of the Drake-Chenault History of Rock and Roll series that aired in the early 1980s. Cool stuff. I remember listening to the series when I was (much) younger.

Most of the albums in my slowly-growing collection were purchased from used record stores. Fortunately, there are several stores in the San Francisco Bay Area (where I live) with a wide selection of artists. Most are in good shape overall, some in very good condition. I have also purchased new pressings that are re-releases of classic albums on 180 gram "ultra-analog" discs. They sound spectacular.

In a bit of irony, most of the records that I have collected so far are albums that I owned back in the day. In fact, there are some that I have purchased four times: first as an LP in the 1960s, second as a CD in the 80s, third as an MP3 in the 2000s, and fourth, now, as an LP (again). Like many baby boomers, I let my LP collection go away when CDs came out. That was a bad call. I have resolved to not buy the same album a fifth time!

The revival of interest in vinyl records is most encouraging. Some artists are releasing new albums on vinyl as well as downloadable files. The Vinyl Snob website has an interesting podcast on "Record Store Day" that is worth a listen. 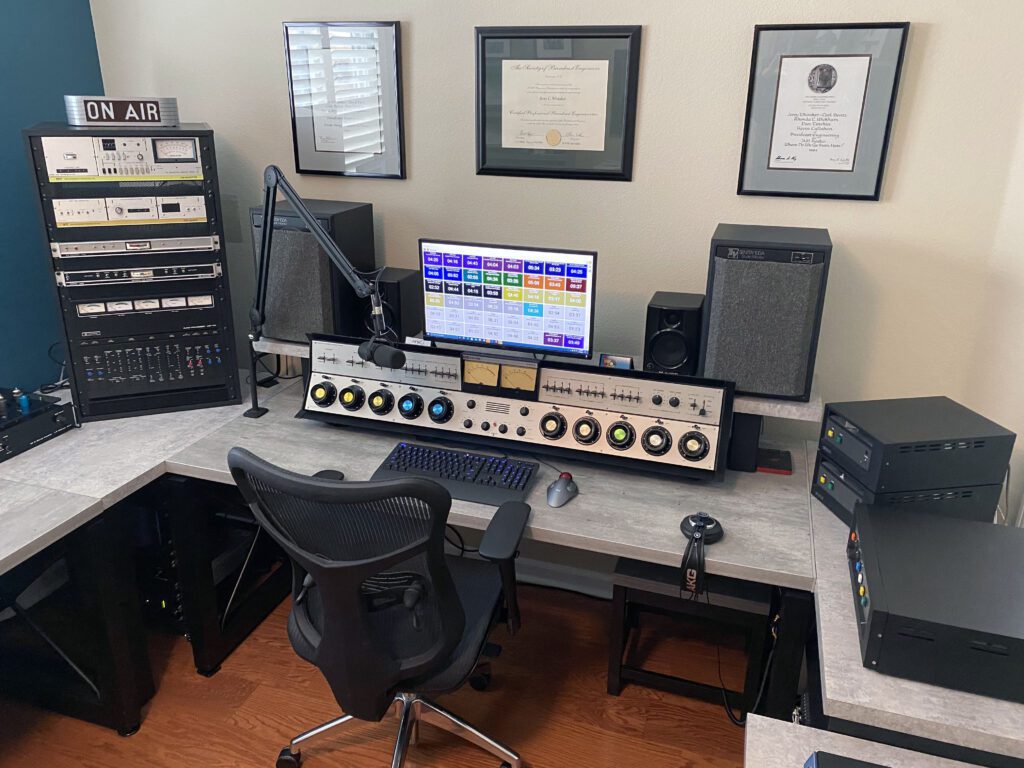 All of the hardware in the studio works and with the Collins exciter operating into a dummy load, the modulation monitors pick up enough energy to operate from an off-air sample. So, it is a complete FM radio station from microphone to transmitter (albeit a very low power station).

Through web searches and other means, I have been able to collect printed manuals for all equipment in the studio. Documentation, of course, is essential for proper operation and maintenance. If you are having trouble locating a manual for the equipment listed above, let me know. I may be able to help.

The studio is an ongoing project. Most work has been completed, however, refinements are planned. A recent addition was the Ampex AG-440 reel-to-reel recorder. It was a big project as the unit purchased on eBay was in rough condition. The restoration project is documented in a blog posting on this site. Additional restoration projects are documented in the blog Additional Rebuild Projects for the 1970s Radio Studio.

For several years I have been looking for an FM transmitter to round-out the 70s radio studio collection. I would love to find a Rockwell Collins 831G-2; that's the type I put on the air in 1979. There are several problems with collecting this transmitter, however. First, it is big and heavy. Second, it requires an ac power service of 208 V 3-phase 4-wire-wye. Third, while I have found such transmitters on eBay, shipping is a major challenge. I had a line on a smaller 2.5 kW Collins rig, but somebody bought it while I figured out how to ship the thing. I haven't given up.

In the process of building the 70s radio studio, I have developed documentation and other resources that may be of interest. Check out the Available Downloads blog posting for details. 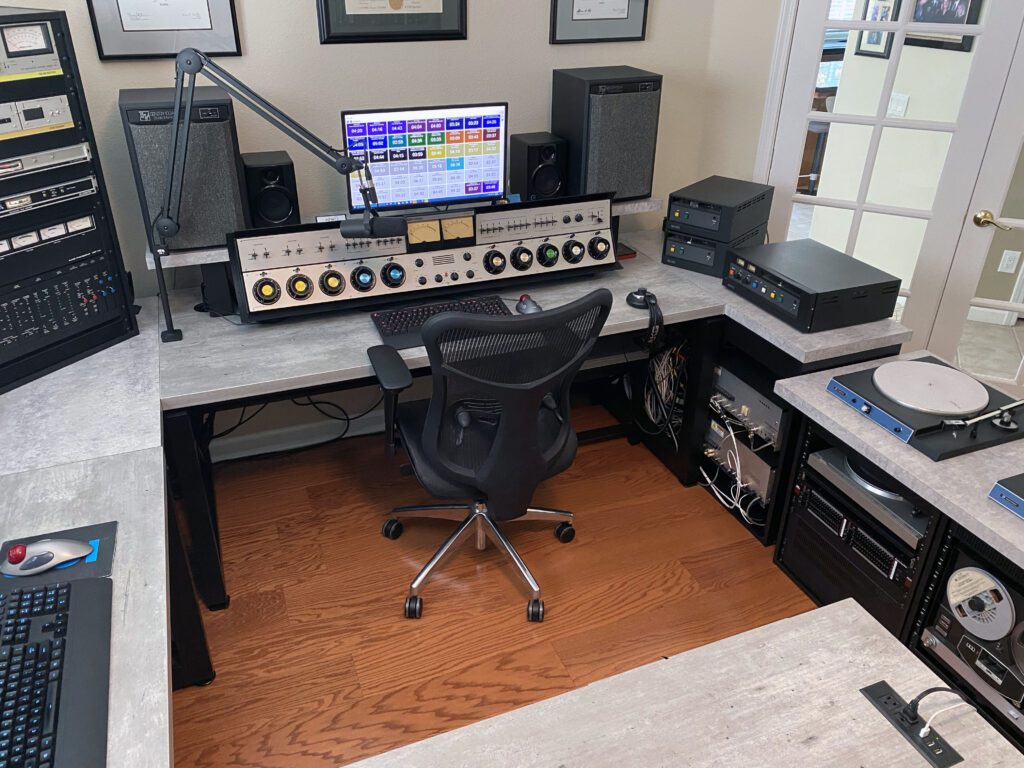 I have been asked (by family members) what's the end game for the 1970s radio studio? I haven't thought that far ahead, and besides I'm having too much fun building the studio. In any event, I see two options at some point in the future: 1) sell it to a collector, or 2) donate the whole thing to a museum. Probably that. Stay tuned...